A Texas woman has captured the dramatic moment she confronted a man who has allegedly been harassing her at the gym for months.

Chelsie Gleason, who is known as @justchesslee on TikTok, was recording herself lifting dumbbells at her local Crunch Fitness when the man started circling her and making comments while she tried to ignore him.

‘Being a female is fun,’ she captioned the video, which has been viewed more than 33.5 million times in less than a week.

Trouble: Chelsie Gleason, who is known as @justchesslee on TikTok, was recording herself lifting dumbbells at her local Crunch Fitness when a man started harassing her 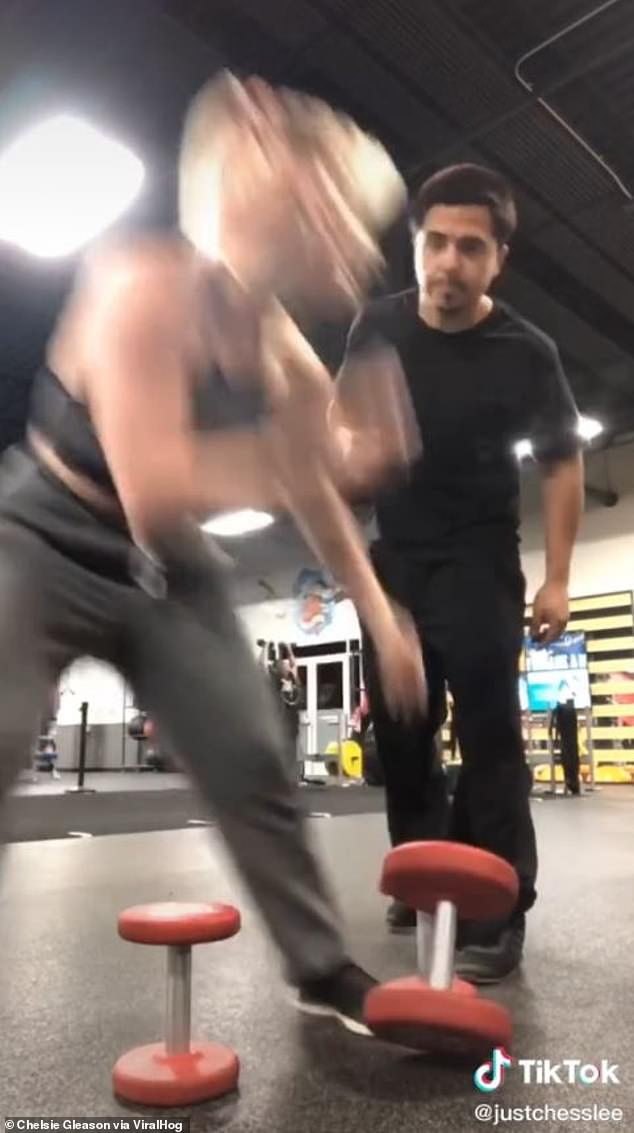 Scary: Gleason jumped away when he got close to her face, yelling: ‘Don’t come near me!’

The gymgoer was doing bicep curls in the mirror when the man came up to her and started rambling about his girlfriend’s personality changing.

‘I was just trying to work out when this happens… I’ve never met this guy, and he’s been harassing me for months,’ she said using the app’s text-to-voice feature.

‘This time I kept my headphones in and tried to ignore him.’

The man appeared to be walking away, but then he came back and approached her from behind. Gleason jumped away when he got close to her face, yelling: ‘Don’t come near me!’

The video has earned nearly 50,000 comments, and many people insisted she show the footage to the gym’s staffers.

‘Retired personal trainer here, please show this video to the staff! Trust me they do NOT want this at their gym!’ one person wrote.

‘You need to tell the front desk immediately,’ someone else added. ‘You have video evidence and they will revoke his membership.’ 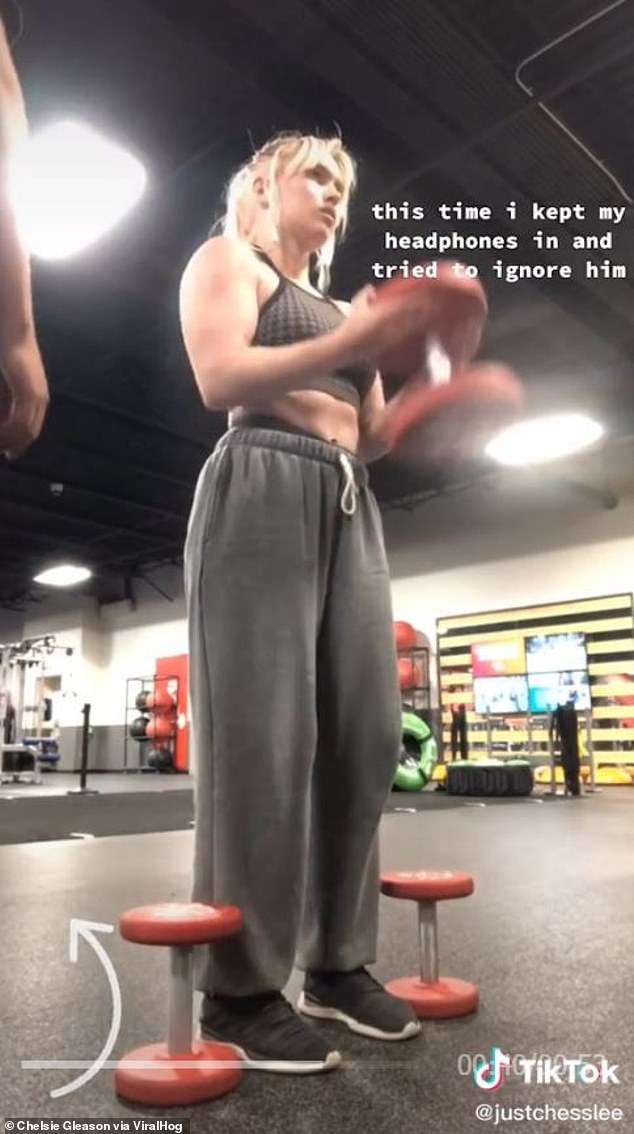 Not working: When the man first started circling her and making comments, she kept her headphones in and tried to ignore him 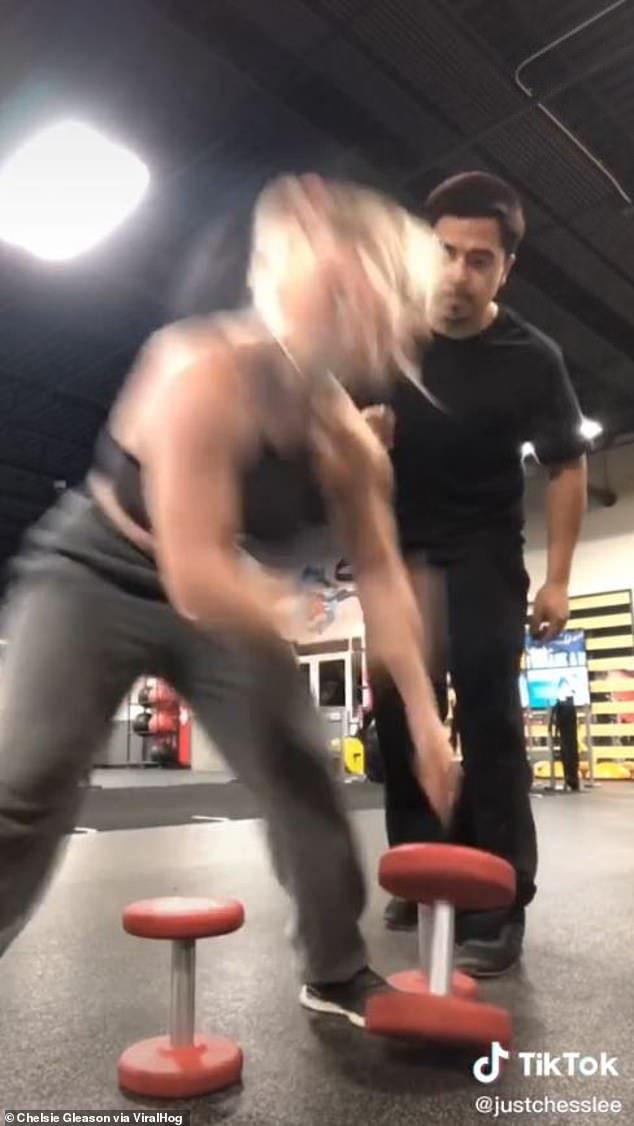 Too close for comfort: The man appeared to be walking away, but then he approached her from behind

Others praised her for sticking up for herself, with one TikTok user noting that is ‘true strength.’

‘He’s been found and has been banned!’ Gleason later shared in the comments. ‘Thank you for all the help @CrunchFitness.’

The TikToker filmed two follow-up videos in which she opened up about the guy’s alleged harassment, saying he had already been in trouble for stalking another woman.

‘I just want to start and say that all the staff members at the gym I go to are really, really great. They were really, really helpful to me,’ she said, explaining the man seemed like a ‘random nice guy’ at first.

She recalled how he would come up to people and talk to them at the gym, herself included, but then his behavior became more worrisome.

‘After weeks and weeks and weeks of this happening, you know, it started getting a little weird,’ she said. ‘Like why is he approaching me? I’ve already told him, “Leave me alone.”‘

According to Gleason, he would talk about weird conspiracies, saying black vans were following him people’s personalities were being changed. He also allegedly claimed Taylor Swift was having his baby.

‘He’s obviously not all there,’ she said, noting that went on for about two months. 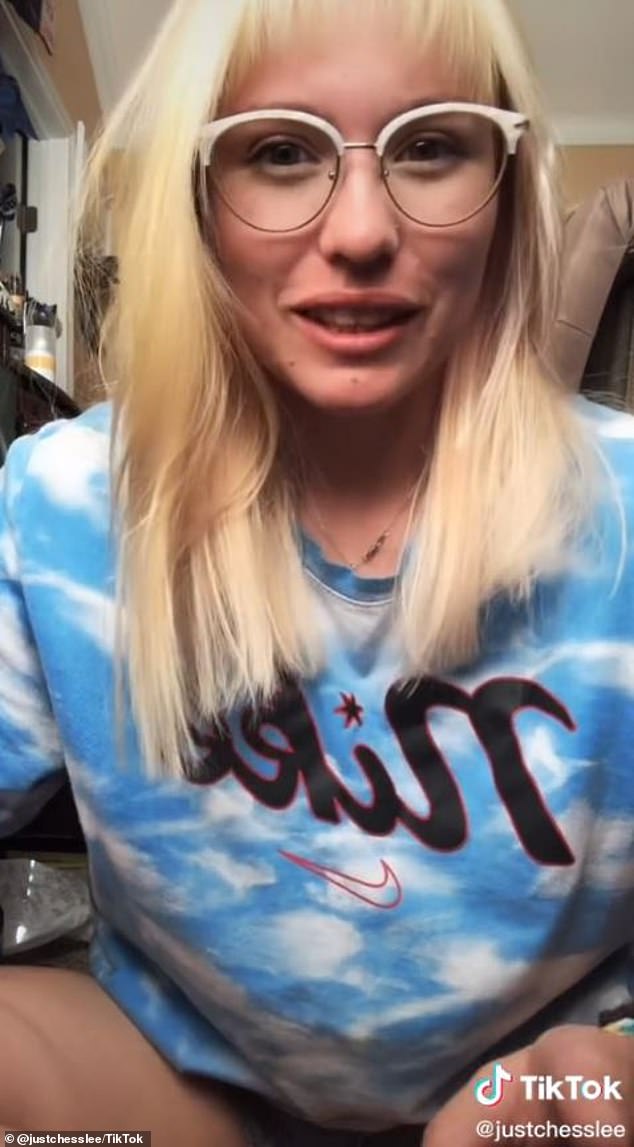 Candid: The TikToker later filmed two follow-up videos in which she opened up about the guy allegedly  harassing her for months, saying he was banned from the gym 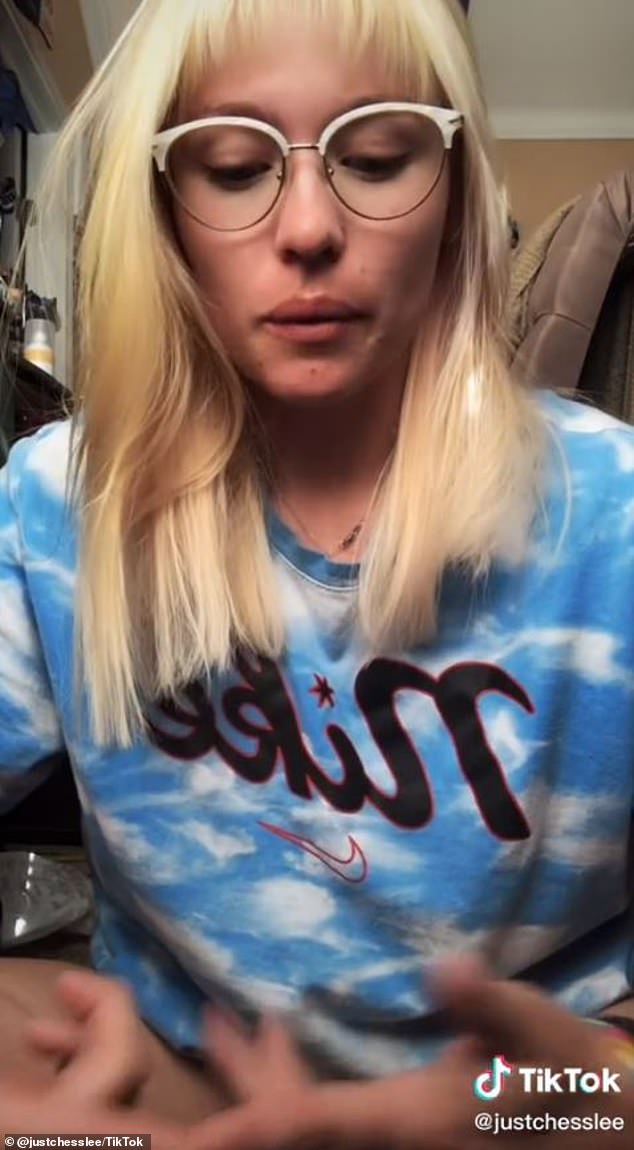 Terrifying: According to Gleason, he was arrested when he tried to come back to Crunch Fitness, and the police learned ‘he already had a warrant out for stalking another girl’

While the staff was aware, he wasn’t doing anything threatening at first. However, Gleason said she had a ‘really horrible interaction with him’ a few weeks ago.

She was working out with some of her girlfriends when he approached them. She told him to leave them alone, which led him to get defensive. He allegedly called her ‘crazy’ and a ‘b***h.’

‘He would follow me around areas of the gym, just make weird comments to me, harass me,’ she explained.

The harassment got so bad that her ‘gym bros’ would walk her to her car to make sure she got there safely. If no one was around, a staff member would escort her.

Gleason said the man got ‘banned’ from the fitness center after her video went viral, but he still tried to come back.

‘When I got to the gym last night, they informed me he tried to come back and the police were called,’ she shared. ‘He was arrested, and they found he already had a warrant out for stalking another girl.’

A number of commenters warned her to get a restraining order against the guy, insisting jail time wouldn’t stop him from coming after her.

‘I have 15 years in law enforcement. Get a restraining order and ALWAYS watch your surroundings when you are leaving the gym,’ one person wrote, while another added: ‘File a restraining order. Cause he will get released pretty quick.’

‘Be careful out there. Stalkers don’t stop just because. Get that suggested restraining order,’ someone else agreed.

How to Buy Essays Online

Joystick Dating Software for Gamers Only Established, But Will Likely Women Signup?

7 days ago Tony Sworth
We use cookies on our website to give you the most relevant experience by remembering your preferences and repeat visits. By clicking “Accept All”, you consent to the use of ALL the cookies. However, you may visit "Cookie Settings" to provide a controlled consent.
Cookie SettingsAccept All
Manage consent